This report seeks to join the dots between Europe’s outsourcing of migrant detention to third countries and the notoriously poor conditions in those migrant detention centres. Europe calls the shots on migrant detention beyond its shores but is rarely held to account for the deeply oppressive consequences, including arbitrary detention, torture, forced disappearance, violence, sexual violence, and death. 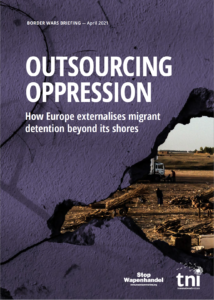 (ENGLISH Report) On 24 September 2020 European Commission released its new Pact on Migration and Asylum. Announced to be a “fresh start” to “build a system that manages and normalises migration for the long term” this document is composed of multiple pillars, objectives, roadmaps and Annexes, and, without a doubt, required a considerable effort on behalf of the European Commission. As a migrant women led platform whose rights and interests the proposed Pact concerns directly, we appreciate the Commission’s attempt to create a framework that must be feasible for the implementation by the Member States and the Union as a whole. However, similar to many migrant and refugee organisations in Europe, we are concerned that the proposed Pact will not meet its stated objectives, some of which are deeply problematic in themselves.