Forum Femmes Méditerranée celebrated during the last weekend of November in Toulouse an event in relation to the International Day for the Elimination of Violence against Women.

The activities celebrated throughout these days were:

On Thursday, there wes a meal-debate “Women victims of violence”. Every Thursday for the past 30 years, the association partage has organized a meal for the inhabitants of the Toulouse “Grand Mirail” district with food donated by the food bank. After the meal a debate takes place on a different theme, this day it was about the fight against violence against women. Esther Fouchier recalled the continuum of violence: Verbal and physical violence, moral harassment, street harassment, rape… As well as the governmental measures to fight this violence. In 2021 there were 122 victims in France and in 2022 already 120. Several participants presented their experiences, their difficulties and the conditions they had to meet to be protected.

Esther Fouchier insisted on the fact that it is difficult to exercise full citizenship when one is a victim of violence and discrimination. She detailed the recommendations of the FORUM program concerning this theme which is one of the seven that the partners have highlighted.

In the afternoon,  the film “C’est pas de l’amour” by Jérôme Cornuau was screened and debated as part of Karavan’s Diversity Cineclub.  The film tells the story of Laetitia, a young housewife, who discovers that her neighbor Hélène is a victim of domestic violence. Mentally and physically harassed by her husband, a seemingly charming man, Hélène refuses to accept her status as a victim until she considers herself guilty. Faced with this painful denial, Laetitia will try everything to save her.

During the screening of the film “C’est pas de l’amour” at the espace des diversités et de laïcité, Esther Fouchier presented the Forum Femmes Méditerranée, notably its action against violence for the defense of migrant women’s rights and the project to fight against the stigmatization of foreigners, sexist and racist of the Forum project. A debate took place on the weak sentences given by the courts to violent men, the difficulties of enforcing the law, the lack of financial means for the training of police, justice and social workers. Many testimonies of women victims of violence followed one another during the evening.

Next day, on Friday, a meeting debate and presentation of the results of the project Forum with the associations of Toulouse in another district of Toulouse a couscous meal were organized. Then the presentation of the device of place of accommodation of the women of victims of violence in Toulouse was presented but the strong time of this afternoon was the meeting of the partners and the beneficiaries during which was presented the program Forum in its entirety with a particular intention on the topic of the fundamental rights of the violence and the professional insertion. The demands were detailed, a passionate debate followed and some more concrete demands were formulated with the promise by the MFF to transmit them to the University of Granada and the partners of the FFM.

Last day, they organized a writing workshop “Stories of Exile” led by Esther Fouchier  in which, first, 13 participants were able to use the inseminator exercise to define exile in relation to their own experience. Then, starting from a first sentence, “quotation on exile from famous writers”, they wrote a short text telling their migratory journey and their will to reach a form of human dignity. The last exercise consisted of inventing a story of exile, using figures, characters, postcards and places taken from the “exile basket”, but it was above all their experience that guided their writing. 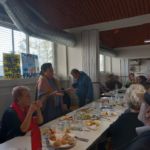 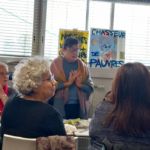 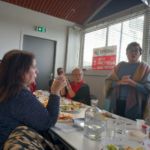 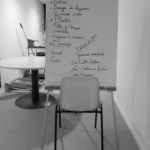 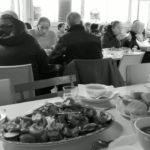 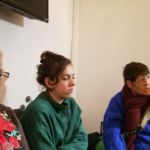 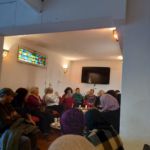 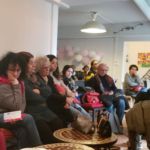 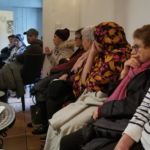 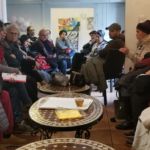 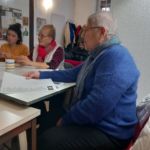 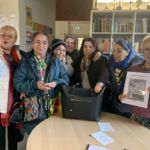